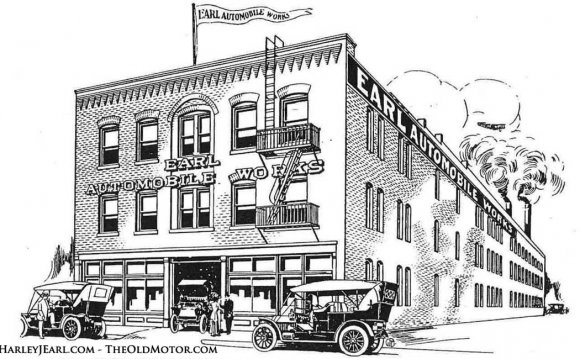 Jacob William (J.W.) Earl, a former woodworker and lumberjack from Cadillac, Michigan, and his wife, who was originally from California, moved their family to California in 1889 and established the Earl Carriage Works at 1320 S. Main Street, Los Angeles, to build and repair horse-drawn carriages and wagons.

Among Earl's first products were simple horse-drawn agricultural wagons used by local Mexican farmers in the "Valley of Smoke" as the Indians called the Los Angeles Basin.

Earl soon started making bodies and simple accessories for the automobile and in 1908 he renamed the small shop to the Earl Automobile Works. A few years later the “Valley” changed forever when the Horsley Brothers made their fist motion picture in an abandoned tavern on Sunset Blvd. at Gower St. in 1911. Earl soon discovered that money could be made supplying the movie industry’s pioneers with Roman chariots, stagecoaches, buggies, fringe-topped surreys and other rolling stock for use in their productions.

J.W. Earl’s custom-built automobile and truck bodies were well-known for their sculpted appearance and could be seen in numerous film studio’s parking lots during the day and cruising Hollywood Blvd. at night.

J.W.’s son, Harley J. Earl (1893-1969), worked in the shop after school and wound up attending Stanford University to study engineering. 6’3” tall Harley was an outstanding athlete who excelled at pole vault, broad jump and shot-put as a member of Stanford’s track & field squad. Much to his father’s chagrin, Harley excelled on another type of track as well.

A favorite story of Earl’s friends is the time when Harley’s dad was calmly reading the newspaper with morning coffee. His shiny new Mercer was resting calmly in the driveway, giving no hint of what had happened to it the day before. Turning to the sports page, the senior Earl glanced at an item concerning a week-end stock car race. "Harley Earl, son of the owner of Earl Carriage Works, won the 100-mile race for stock cars here yesterday with a special new Mercer recently purchased by his father". Earl also had a penchant for “test-driving” newly-bodied cars through downtown Los Angeles to test the crowd’s reaction to his father’s latest handiwork.

In 1918 Harley dropped out of school and was put in charge of dealing with his dad’s fast-growing custom-body clientele. Earl had a special talent for both schmoozing with and designing exotic bodies for Hollywood’s elite and became friends with many of them; Cecil B. DeMille and Tom Mix were among his closest friends.

In January of 1919, Harley exhibited two of his creations at the Los Angeles Auto Show; a Marmon Phaeton and a Chandler Town Car. The Los Angeles Times reported:

"Perhaps the most startling local models at the show are those built by the Earl Auto Works, whose sensational Chandler and Marmon are attracting huge crowds. These cars are designed by Harley Earl, a local man who only three years ago, was broad jumping at the University of Southern California, and has sprung into prominence as a maker of motor fashions almost overnight.

"The Chandler town car, in blue, is the classiest thing of its kind ever shown on the Coast or any place else. It is surely distinctive, being a low hung creation; so low that a good-sized man can stand along side and look right over the top, yet there is sufficient room inside to keep one from being cramped."

The Auto Show had brought Earl Automobile Works to the attention of Don Lee, who bought the company later that year and ab­sorbed it into his pre-existing Don Lee Coach & Body Works. J.W. Earl retained his previous position as shop manager and Harley was appointed chief designer.

On July 13, 1919, the San Francisco Chronicle reported that, ". . . [Don Lee has acquired]. . . the largest plant of its kind west of Chicago, and for several years Earl’s has been one of the six largest builders of custom bodies in the United States. J.W. Earl...will continue in active charge, and his son, Harley Earl, will continue as chief designer.

"It is Don Lee's intention to turn out the very best coach work obtainable anywhere. With this idea in view, he will send one of his designers to New York twice a year, and as soon as European manufacturers are once more in pro­duction, a Don Lee designer will make a yearly trip abroad… Harley Earl will leave this week for a trip to the Eastern factories to ascertain the trend of the enclosed car styles for the coming fall and winter. Immediately upon his return, construction will be started on several types of the newest enclosed car designs."

Don Lee had been selling Cadillacs since 1906 and had become Cadillac's official West Coast distributor at the beginning of 1919. Lee’s dealerships blanketed the state and were in all of its major cities – Fresno, Los Angeles, Oakland, Pasadena, Sacramento and San Francisco. Lee’s major west coast competitors in the early 1920s were Earl C. Anthony’s Packard dealerships and Walter M. Murphy's Lincoln franchise.

In the early 1920s the business of supplying coachbuilt bodies to the luxury car trade was lucrative and the Don Lee-Harley Earl partnership prospered. Soon after the takeover, the combined firm employed 90-100 craftsmen and produced some 250 custom cars a year.

Harley and Cadillac president, Lawrence P. Fisher would become good friends during this time, as Don Lee Coach and Body Works would do increasingly more business for Cadillac, until in 1925 they fitted 100 customized bodies onto Cadillac chassis.

By the mid-twenties Don Lee Coach & Body Works was turning out over 300 bodies a year and Harley Earl was able to boast of wining and dining with the biggest celebrities of the time.

Harley would design a car body starting with two dimensional rough-sketch, then turn his favorites into small clay models to show to the client. Up until that time, designer’s sketches were turned into full-size body drafts but were rarely modeled in three dimensions. When a three dimensional model was made, they were typically made from plaster and wood. Clay allows stylists and modelers greater freedom as well as a more malleable modeling process. Earl helped develop and perfect the rules which would govern car design for the next 50 years. Even today, it’s still not known whether Earl sculpted his own early clays or had them made by an assistant.

How Steel And Steel Alloys In Automobile Works