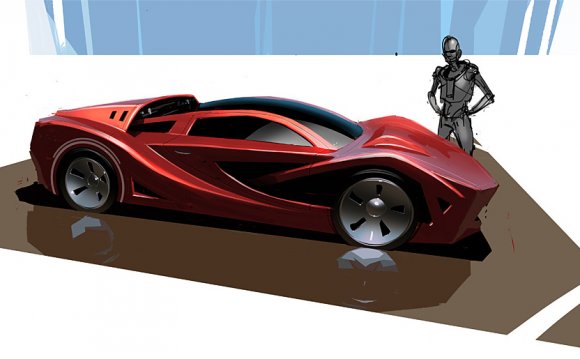 Since the start of 2015, Gizmag has racked up plenty of sky miles chasing stories about the latest cars and in-car technology at the world's major motor shows and beyond. From American heroes at the LA and Detroit shows to the latest from German powerhouses in Geneva and Frankfurt, we've seen all manner of concept cars. Some were brilliant, while some would've been better if they'd stayed on the drawing board.

As usual, some of the best concepts of the year were high-end sports cars that point to the future of performance driving with clever powertrains, slick aerodynamics and dramatic styling. Here are our picks for the best of 2015.

Aston Martin might be best known for creating drop-dead gorgeous sports coupes, or even for its work with James Bond's Q-Branch, but the concept that has made it into our list this year is actually an SUV. The DBX made a surprise appearance at the Geneva Motor Show. According to Aston CEO Dr. Andy Palmer, "it envisages a world, perhaps a world not too far away, when luxury GT travel is not only stylish and luxurious but also more practical, more family-friendly and more environmentally responsible."

Beyond the CEO's slightly ambitious wish list, Aston Martin's engineers are very clear the DBX should be packing a high-tech drivetrain. Power will come from motors in all four wheels, which allows the car to operate in all-wheel drive and frees up space under the hood for storage – important when bootspace is heavily impacted by that sloping roofline. In Aston's vision for the DBX, the motors draw power from lithium-sulfur cells that replenish through an F1-style kinetic energy recovery system (KERS).

Yamaha may be a brand known for its motorbikes and musical instruments, but in 2015 it gave us something special on four wheels.

Built around an iStream carbon fiber monocoque designed by Gordon Murray, the Yamaha Sports Ride Concept features a chassis made up of two carbon skins sandwiched around honeycomb core, a method designed to cut the cost and time currently involved in creating carbon fiber for cars. Because of that lightweight carbon core, the MX-5-sized Sports Ride Concept weighs just 750 kg (1654 lb).

There's no word on what might be powering the car, or if it will ever reach production, but the thought of a carbon-tubbed car powered by the motor from the bonkers YZF-R1 is an enticing one.

While it may not be pretty to look at, the S-FR is on our list because of what it stands for in the world of sports car motoring. Launched at the Tokyo Motor Show, the tiny Toyota has been designed as a small, rear-drive sports car to slot in underneath the GT86.

Exactly what could slot in under the bulbous hood has not been disclosed, but Toyota was at pains to explain the car has been designed with sharp, responsive handling in mind. The engine is set back in a front-mid mounted configuration for better weight distribution, and there's independent suspension at each corner to help keen drivers keep control on the road or track.

Gran Turismo has spawned some of the most exciting concept cars of the past few years, but none are more exciting than the Bugatti Vision Gran Turismo. That's because this Bugatti isn't just a flight of digital fancy – elements of its design preview the Chiron that will debut in Geneva.

Whereas a lot of the cars conceived for Gran Turismo bear no resemblance to road cars, Bugatti has made a real effort to make sure every element of the design serves some practical purpose. For example the NACA duct on the roof has been designed to channel air to the engine without creating turbulence, and the central fin on the roof of the car contributes to dynamic stability.

Thanks to Bugatti's latest simulation models for dynamics and aerodynamics, we even know that the car should top 400 km/h (250 mph) in four separate areas of Le Mans.

Since swapping to Honda power at the start of this season, McLaren's fortunes in Formula One have taken a steep downturn. It's no surprise, then, the brand has decided to take a look beyond the current situation and do some blue-sky thinking about the future of motorsports.

The MP4-X is what happened when McLaren's engineers pondered the future of fuels, lubricants and power – including electrical power. This approach means the MP4-X's design integrates batteries into the crash structures of the car, and the body includes solar cells that provide extra charge, augmenting the energy recovered by KERS systems.

There's a lot more to the body than just solar panels. The most noticeable aspect of the whole design is the canopy, an idea discussed in the wake Jules Bianchi's death. For a full rundown of what the MP4-X can do, check out Aaron Turpen's in-depth look at the car.

The EXP 10 was one of the biggest surprises dropped on the world's motoring press this year. According to Bentley, the EXP 10 Speed 6 is designed to be the ideal "British interpretation of a high performance two seater using modern automotive design, highly skilled handcrafting, the finest materials and advanced performance technology."

Automobile Concept Cars from Toyota and Nissan at CEATEC 2012