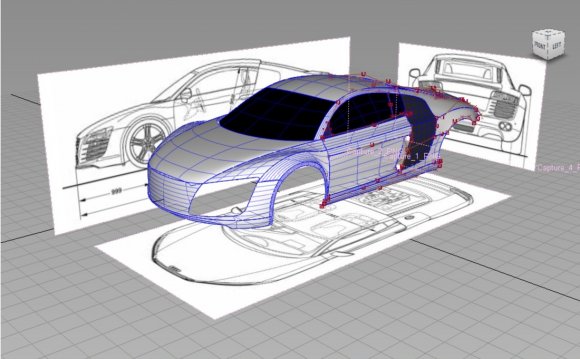 As an automotive company, we were used to do all the digital work in one software, Alias, which is mostly dedicated to industrial design. However, we knew that using this software in the early stages of creation was very time consuming. The questions raised were how to speed up the process and how to make our digital life easier: one answer, use a different software during those early stages.

That’s how we got into Blender; in a car creating a digital model of a seat is particularly long because of the soft materials used and the criteria. I was between interviews when I was asked to model, in Blender, a seat of my choice for a test. Based on pictures, I modelled a front seat in 4 hours when my future manager Pierre-Paul Andriani expected me to release this data in a day or two. That was the first step of our journey into Blender.

Then step by step or, should I say, proof of concept by proof of concept, we implemented Blender into the process. We took advantage of a new project to try new possibilities. We first rebuilt the exterior of the project based on a scan then we gave this data to the engineers. In the first stages, engineers were used to receive the scans which are incredibly heavy. Getting some lighter data changed their life.

Because our project needed us to create a range of cars, we used Blender to create it. Based on the rebuilt model and with two or three modellers, we created nine iterations of the base car in five days. This type of work would take us between ten and fifteen days with Alias. That was definitely the exercise which showed to the design studio the huge advantage of using Blender in the early stages of a project. “Early form studies don’t need to be as precise as NURBS models. We use Blender as a tool for management to sign off on the design volumes. Once package decisions are made we can move on to the next steps in Alias” said Pierre-Paul.

Since then we keep trying new tasks. We milled an exterior with Blender data, we created a model from scratch based on a sketch and a defined wheelbase. The designer can see modifications in real time instead of having to wait for a couple hours. Between the first test and full implementation only 4 months had gone by. We are also experimented with rendering, animations and how to create a new process for these two tasks.

V-Ray for Rhino in Automotive Design